For over ten years, Creasie M. reported suffering from countless health problems as a result of her breast implants. It wasn’t until she found Jason J. Rosenberg, MD, at The Orthopaedic Institute (TOI) that she regained her quality of life and was able to live pain-free again.

Creasie’s journey began back in 2006 when she received her initial breast implant surgery. Although she was a healthy individual prior to her procedure, she was diagnosed with Hashimoto’s disease and hypothyroidism by the end of 2008.

Hashimoto’s disease is an autoimmune condition where the immune system’s antibodies attack the thyroid. As a result, Creasie’s thyroid became damaged and was unable to produce an adequate amount of hormones, leading to hypothyroidism, also known as an underactive thyroid.

Our thyroids are responsible for the way our body uses energy, affecting our breathing, heart rate, weight regulation, digestion, and mood fluctuations. Without enough thyroid hormones in her bloodstream, many of Creasie’s natural functions slowed down considerably, leading to several health problems.

In 2009, Creasie gave birth to her first child, but the joys of motherhood were unfortunately short-lived, as her health rapidly went downhill. Creasie began to have panic attacks and debilitating anxiety to the point where it felt as though her heart would beat out of her chest. Her doctor at the time suggested that she take antidepressants. However, these medications only exacerbated her symptoms.

“It got me to a point in my life where I couldn’t even drive anywhere, or even almost leave the house,” Creasie explained. “Everything just affected me.” She was in so much pain that she struggled with daily tasks and was unable to work out. Despite the prevalence of her symptoms, Creasie’s thyroid-stimulating hormone (TSH) test results depicted that her levels were optimal, indicating the presence of another underlying issue.

Getting to the Source of Her Symptoms

About three years after her initial breast augmentation procedure, Creasie mentioned, “I actually heard about breast implants being a problem, but I didn’t want to believe that that was a problem.” Instead, she trusted her doctor that her health concerns came from her thyroid conditions.

While her doctor insisted she would be fine if she took her thyroid medications, Creasie continually felt unwell. Over the years, she coped through prayer and her faith in God, but she knew that something needed to change.

She eventually came across women talking about breast implant illness (BII), a term used by some women and doctors to characterize an extensive range of inflammatory symptoms that can develop after a breast implant procedure. From Creasie’s perspective, she viewed this condition in a slightly different way. She conveyed, “I talk about it being more of a foreign object in my body. My body was continually rejecting those breast implants.”

Creasie was unsure if these foreign objects triggered her autoimmune disease or if they just escalated her symptoms. Either way, she knew three years into having breast implants that her heart was trying to tell her that her implant could have been a problem, but she ignored it. Instead, she kept her implants for another ten years, which “was horrible.”

Finally, Creasie realized that she couldn’t take anymore. She made the decision to have her implants removed so that she no longer had to keep wondering if they were the problem or not.

When Creasie first made the decision to get her implants removed, she felt overwhelmed. From not liking surgery to wondering how to pay for it, Creasie had numerous concerns. To alleviate her anxieties, she called the plastic surgeon who performed her initial implant procedure. However, he made her uncomfortable with the way he discussed the explant procedure, and she attests how “It didn’t feel right.”

Creasie’s husband continued to push her to search for more options. Through prayer, Creasie believed God led her to Dr. Rosenberg at TOI. At her consultation with Dr. Rosenberg, Creasie was with her husband, and she said: “As soon as he talked to me about it, we both looked at each other and said, he’s it.”

She emphasized how she felt very reassured and comfortable with the procedure, and peace fell over her. Creasie knew in her heart that God had delivered her long-sought-after solution.

After Creasie’s surgery, it took about six months to really feel the difference in her quality of life. Creasie recognized that her body had been in a horrible inflammation mode for years, so she began taking supplements and eating better to promote her overall wellness now that her implants were removed. As a result, she was able to start working out again, perform more day-to-day activities, and lose weight.

When she got pregnant for the third time, her pregnancy went a lot better as well. Creasie maintained a healthier weight, could breastfeed for longer, and experienced less pain and inflammation in her body. Since giving birth a few months ago, Creasie now hopes to get her health back to where it was before her third pregnancy.

Creasie’s quality of life has significantly improved since her explant procedure, and she has been dedicated to ensuring that others receive this life-changing care with Dr. Rosenberg. “He was very compassionate. He’s the type of doctor that looks you in the eye,” she explained. “You can tell he cares.”

Creasie ended up telling everyone she could about her wonderful experience with Dr. Rosenberg. From being active on his Facebook pages to word of mouth, she wants to help anyone who may be experiencing symptoms now or in the long term.

“He was great. I’m thankful I took this shot after all this time,” Creasie stated. “It took me so many years, but I am happy with my decision.”

Schedule a Consultation with Dr. Rosenberg

You know your body best, and if something doesn’t feel right, it’s important to seek treatment. If you or a loved one has had a breast implant procedure and are experiencing adverse symptoms, schedule a consultation with Dr. Rosenberg today to explore your options. 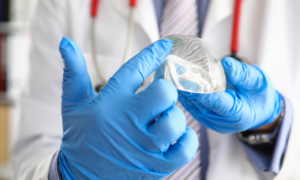